Refugees in our time 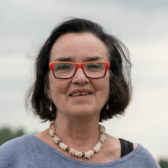 Good morning {{first_name}} {{last_name}}, The number of refugees has always been high. It used to be